The Irish flag has a long history and it being a stunning piece of decorative art. It is rich in history and has a wide range of symbolism. If you’re looking for a stunning flag to add to your collection, stay tuned with Flagwix.

The History Of The Irish Flag And What It Represents

The Irish flag has a long history.

On this day in 1916, on Easter Monday in Dublin, the Irish Republican Brotherhood, a secret organization of Irish nationalists led by Patrick Pearse, launches the Easter Uprising. , an armed revolt against British rule.

Under the leadership of James Connolly, Pearse and his Republican friends rioted and attacked British local government headquarters across Dublin and captured the General Post Office in the Irish capital.

After these successes, they declared independence for Ireland, which had been under the oppressive hands of Great Britain for centuries, and by the next morning controlled much of the city.

Later that day, however, the British authorities launched a counter-offensive, and by April 29, the uprising had been quelled.

The Easter uprising is seen as an important mark on the road to the establishment of an independent Irish Republic.

After many battles and sacrifices, no peace agreement was reached, finally, in July 2005, the IRA announced that its members would give up their weapons, and pursue the goals through peaceful means.

In the fall of 2006, the Independent Oversight Committee reported that the IRA’s military campaign to end British rule had ended.

Thomas Francis Meagher, a leader of the young Irishmen, raised the flag from Wolfe Tone on March 7, 1848. Confederate Club at 33 The Mall, City of Waterford. 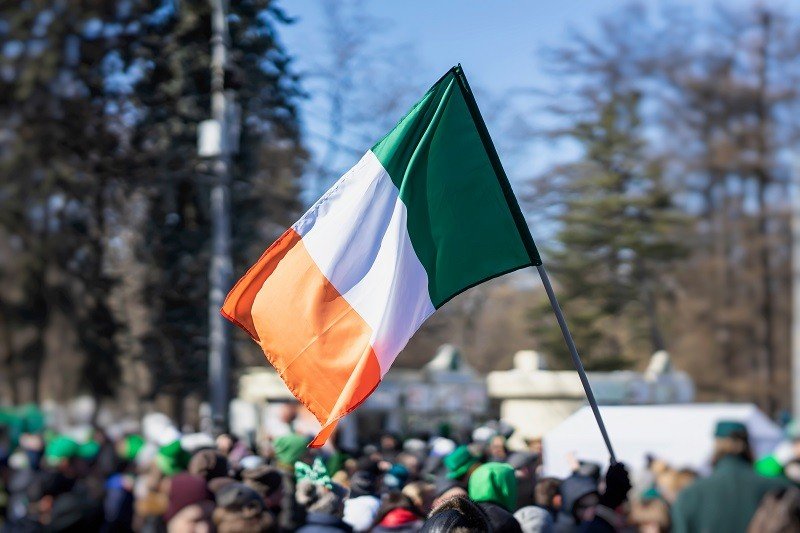 Like other countries, the Irish fly their flags on special occasions and holidays such as Leprechaun Day or Saint Patrick’s Day. They hang it proudly and don’t hesitate to share with any tourist what it means. One of the greatest strengths of the Irish is their friendliness and never discrimination against foreigners, no matter where they come from. 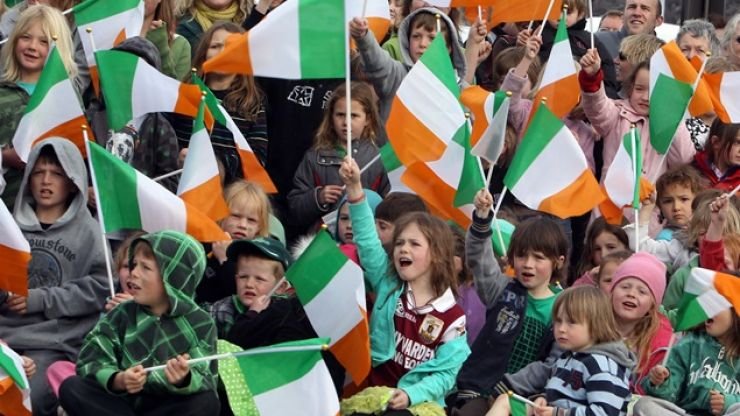 – Do not hang any other flags on it

– Do not place any pictures, slogans, symbols, or other images on top of the flag.

– When the flag is old, it needs to be replaced immediately

The Meaning Of The Colors On The Irish Flag

Each country’s national flag includes meanings related to its history and national character. Ireland is no exception, especially given the country’s long and tough history.

Continue reading to learn more about the Irish flag.

Overall, the Irish flag is a symbol of hope for the integration of different faiths on the island of Ireland, which is reflected in Article 2 of the Irish Constitution. 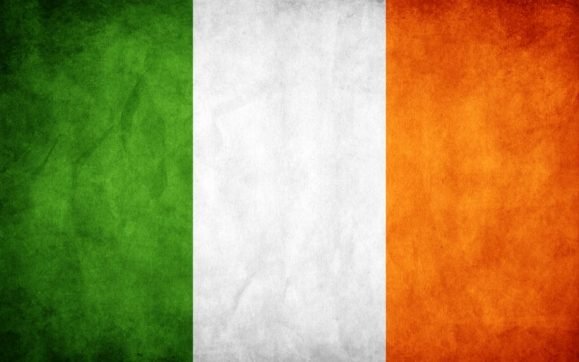 It says: The right of every person to be born in Ireland is to become part of the independent nation of Ireland, regardless of national origin, religion, or political belief.

Occasionally the irish flag colors will appear yellow instead of orange. It is a normal thing because the Irish Government thinks this will encourage and promote peace and further solidarity between the two religions.

Being able to be flexible in the colors of the Irish flag as above is to encourage, support, and prevent Protestants in Ireland from feeling left out.

On April 15, 1848, Thomas Francis Meagher, a leader of the young Irish people said: “The white in the center symbolizes the lasting truce between France and Ireland”. The green color of the flag symbolizes republicanism. And the orange color of the flag represents Protestants.

What Flag is Green, White and Orange? 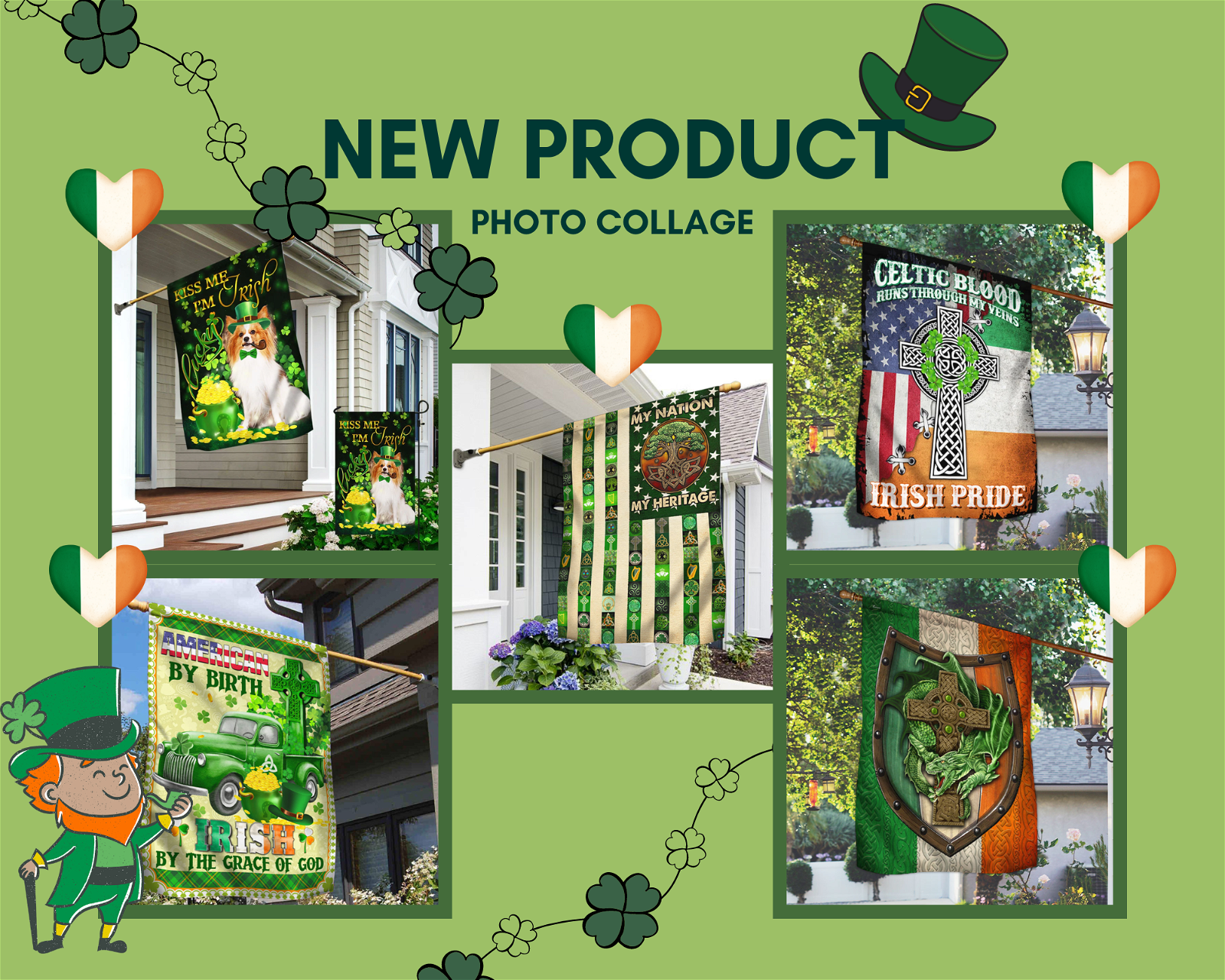 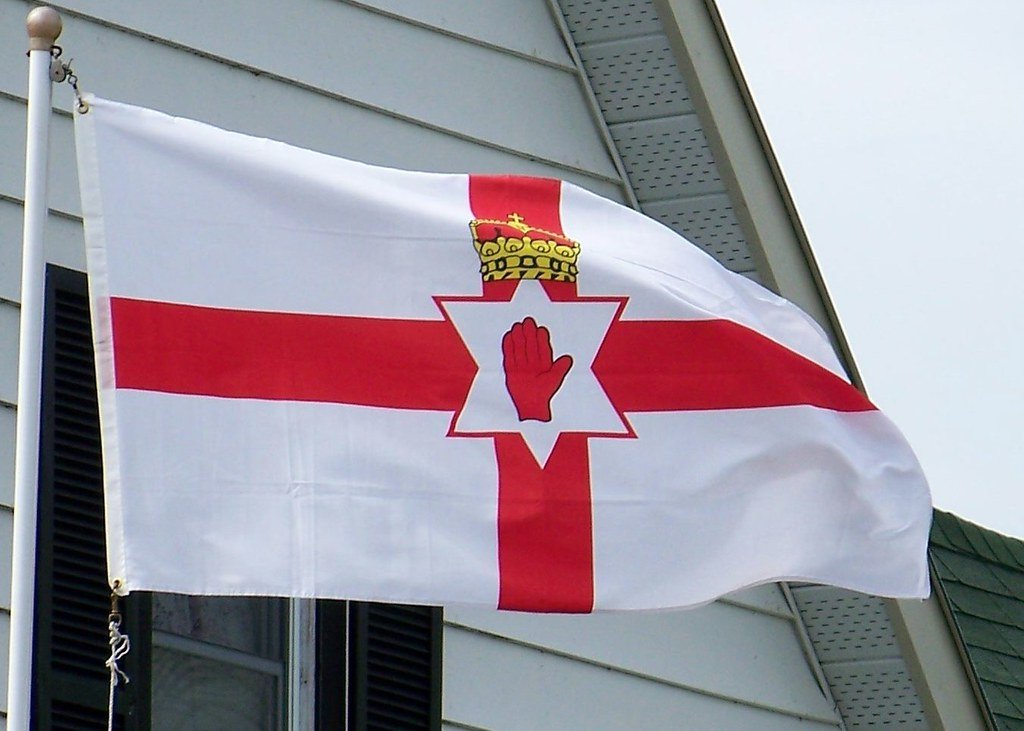 The capital is Belfast, a modern and historically significant city that was heavily damaged by bombing during World War II. Belfast is famous for its shipyards – the Titanic was built here.

The coat of arms of Ulster, in the shape of a red cross, is said to have been worn by the earls of the de Burgh family centuries ago.

The Inescutcheon (small shield in the middle) of the Ulster coat of arms has a red right arm, the symbol of the O’Neill (Uí Néill) clan since the mid-17th century, although mythology holds the emblem to King Heremon O’Neill in 1015 BC.

In 1924, inescutcheon was redesigned into a six-pointed star, perhaps referring to the six Ulster counties (out of the nine) that today form Northern Ireland. The royal crown is placed on the star to show Northern Ireland’s allegiance to Great Britain.

When the government of Northern Ireland was dissolved in March 1972, the country’s weapons and flags officially disappeared; however, the flag continues to be used by groups (such as sports teams) that informally represent the territory.

According to Wikipedia, the flag of the United Kingdom of Great Britain and Northern Ireland, also known as the Union Jack, is a combination of three flags of three lands of England (England), Scotland and Ireland stacked on top of each other. In the flag there are 3 overlapping crosses, each cross represents the guardian saint (guardian) of each of the above-mentioned lands.

The flag of the United Kingdom of Great Britain and Northern Ireland is often displayed in public buildings or during sporting events or when a member of the Royal Family visits the locality. The British decorate the streets with many small flags during national holidays.

According to Ireland Information, through movies and television, many people always think of the clover (Shamrock) as the national symbol of Ireland. Saint Patrick, the patron saint of Ireland, used it as a metaphor for the Christian Trinity. However, it is the harp that is printed on the national emblem of this country. 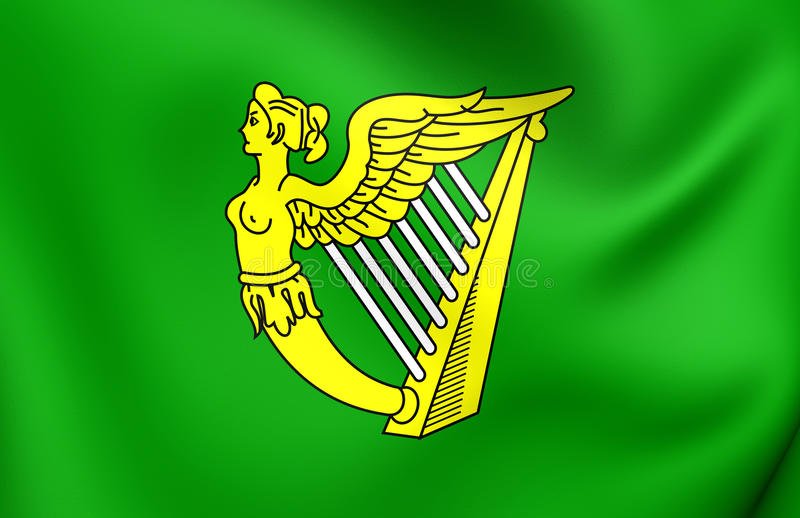 Since ancient times, the harp has always occupied an important place in Irish culture. Ancient wood carvings illustrate a feast in which the harpist is celebrated.

Around 1534, King Henry VIII circulated a coin with a harp and a crown at the top. After that, the harp on a blue background often appeared on many official royal occasions. Gradually, the green flag with the yellow harp came to be seen as the symbol of Ireland, albeit unofficially.

The design is simple, the flag background is green like the inherent color of the national flag and the text “Irish Republic” is yellow. 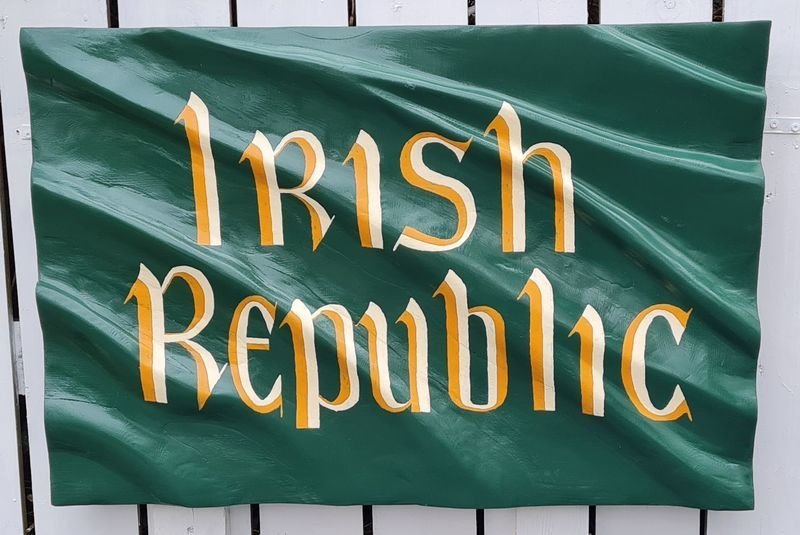 Not the flag, but a dessert in the colors of the Irish flag! 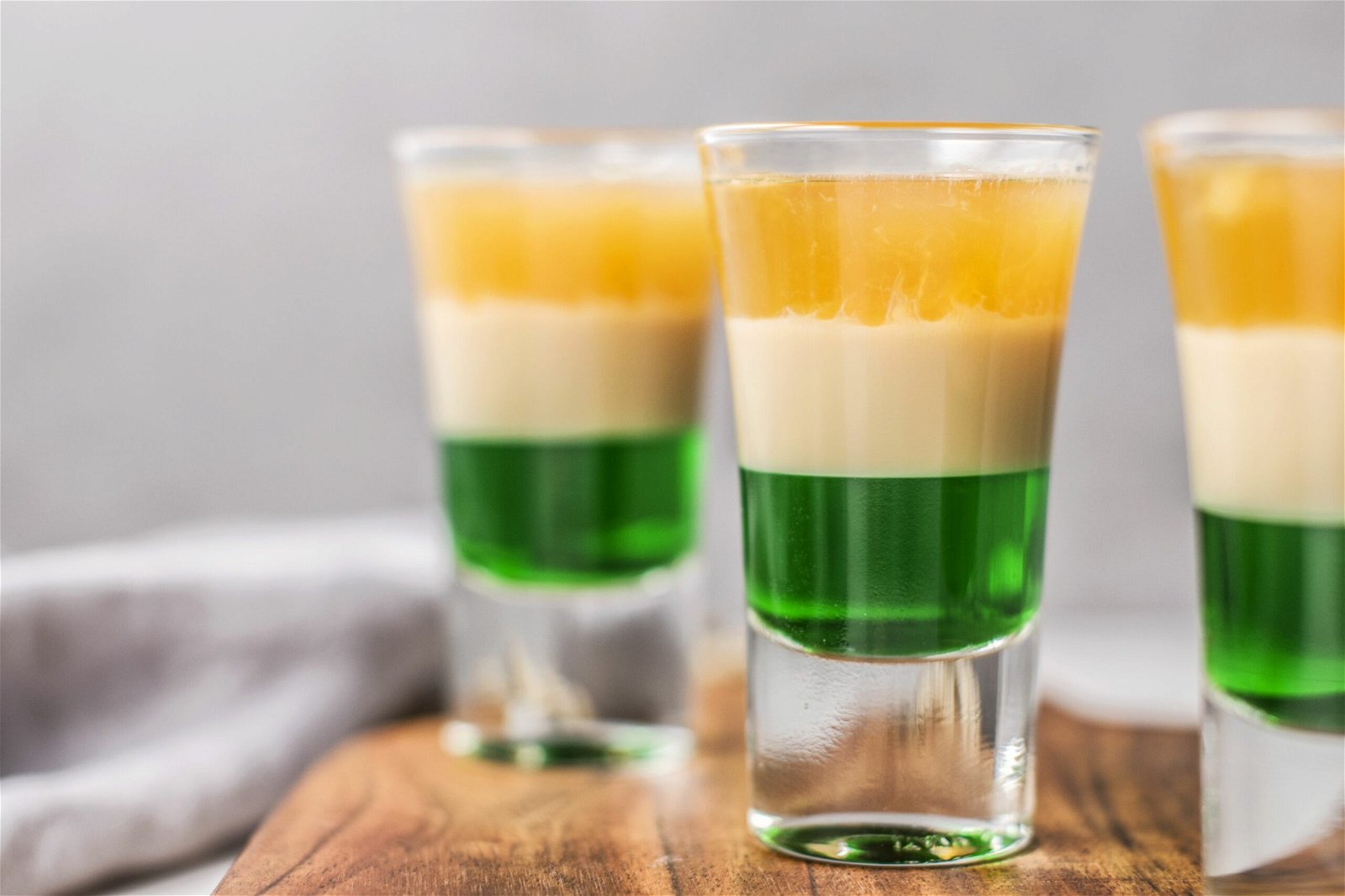 The Italian flag and the Irish flag are comparable because their designs and color tones are similar. 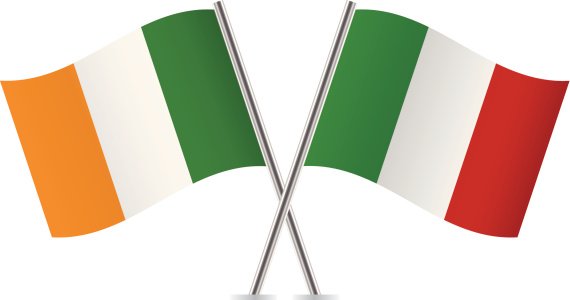 However, the national flag represents the meaning and pride of each country, and if you pay attention, you will easily distinguish these two flags.

In conclusion, the Irish flag is a symbol of national pride. It is also a popular decorative flag, especially among those of Irish heritage. If you are looking for a decorative flag to add to your collection, come and check out Flagwix with Irish decorative flags.

What colors are on the irish flag?

The Irish flag is made up of three colors: green, white, and orange. Thomas Francis Meagher, a leader of the young Irish people said: “The white in the center symbolizes the lasting truce between France and Ireland”. The green color of the flag symbolizes republicanism. And the orange color of the flag represents Protestants.

What does the irish flag symbolize?