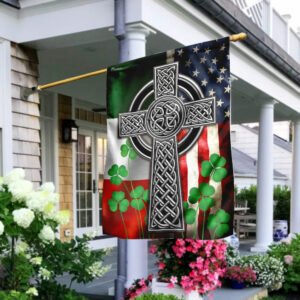 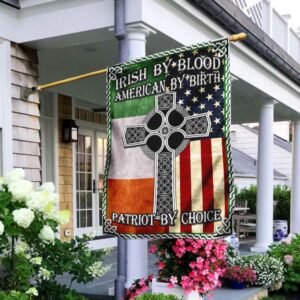 Irish By Blood American By Birth Patriot By Choice Flag 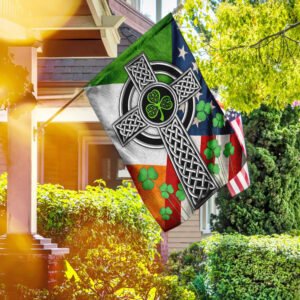 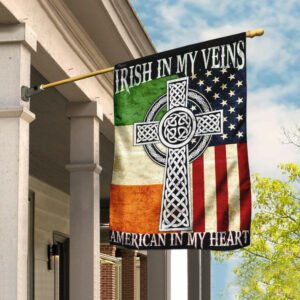 Irish In My Veins – American In My Heart Flag 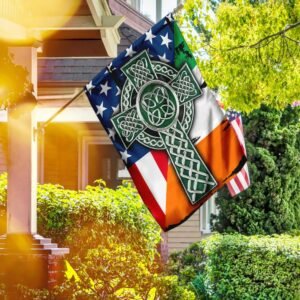 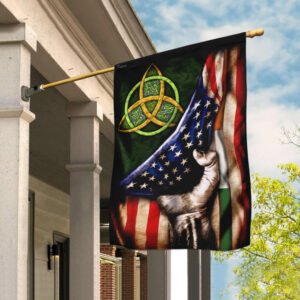 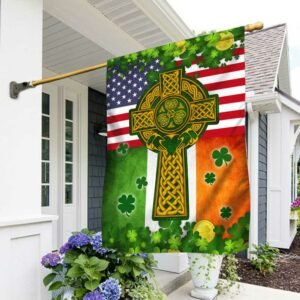 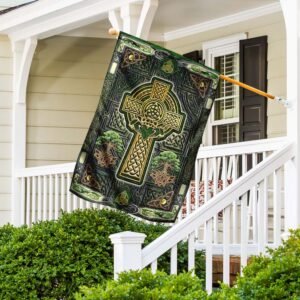 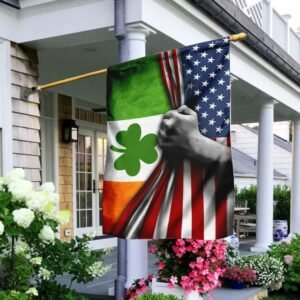 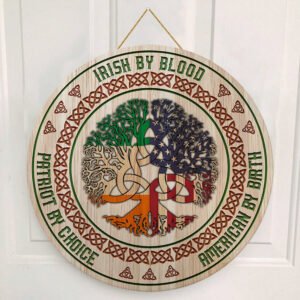 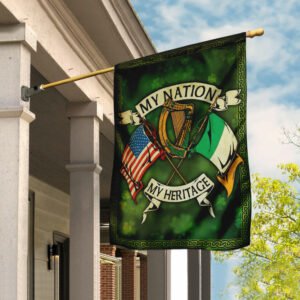 Irish My Nation My Heritage Flag 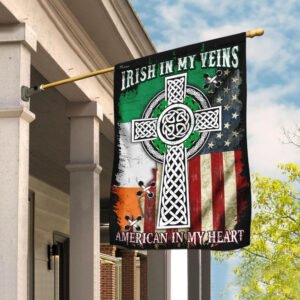 Irish In My Veins, American In My Heart. Celtic Knot Cross Flag 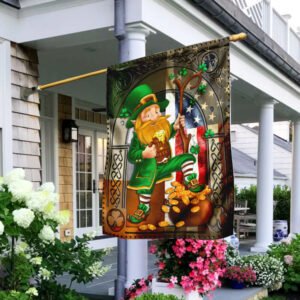 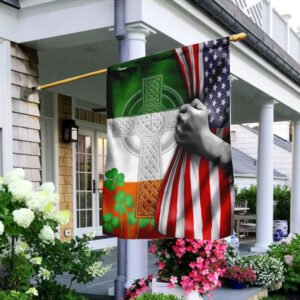 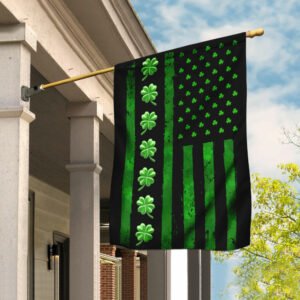 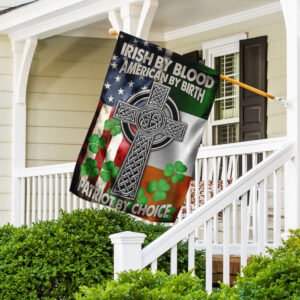 The Irish flag is one of the most recognized flags globally and also one of the oldest national flags still in use today. It consists of a vertical green-white-orange tricolor.

At first glance, some might confuse it with the Italian flag or even that of Qatar. But once you understand the meaning behind the colors and pattern, you’ll appreciate its design even more.

The Irish flag is known as the tricolor (or Tricolour). It consists of three vertical stripes that are green on the left and orange on the right, with white in the middle. The Irish flag colors were chosen to represent Ireland’s Gaelic heritage.

The flag is a symbol of the country, the island, and its people. There are many flags in use around Ireland for different purposes, such as sporting events and organizations. However, there is only one flag that represents all Irish people.

But why’s that? Let’s find out through its history!

A Brief History Of The Irish Flag

The Tricolors had been famous since the Easter Rising (1916)

It was adopted as an Irish national flag by the Fenian Brotherhood and Irish Republican Brotherhood in 1848 and later by Sinn Féin and other organizations after independence was won in 1922.

The flag’s official status dates to the 1937 Constitution of Ireland, which made it “the national flag and ensign of Ireland”.

Today, it is flown on some public buildings throughout Ireland as well as at general civil ceremonies such as inaugurations or commemorations.

Meaning Of The Irish Flag Colors

The color green has had many different meanings throughout Irish history.

It was originally used to represent Catholics, who were often discriminated against in Ireland.

Green also represented Gaelic culture and language, as well as the country’s landscape.

Additionally, it’s a well-known fact that the Green on the Irish flag symbolizes republicanism, dating back to the Society of United Irishmen in around the 1790s. Today, green represents Irish nationalism and independence.

Protestants in Northern Ireland first used orange to symbolize their loyalty to Britain during World War II. It later became associated with loyalist paramilitaries such as the Ulster Volunteer Force (UVF).

Today, orange represents British unionism and Protestantism in Northern Ireland. Some republicans also use this color to commemorate those who died fighting for Irish independence from Britain during the Easter Rising of 1916 or for the IRA during The Troubles period from 1968 until 1998.

The white in the center signifies a lasting truce between two sides and a living together in peace and harmony. As a whole, the Irish flag is to represent a country of inclusion and reconciliation among various religions and political stances.

Interesting Facts About The Flag Of Ireland

It’s not always the orange color

Sometimes you might spot gold instead of orange on the Irish flag. That’s not a flag manufacturer’s mistake since the gold color is there for a particular reason. This color represents the harp – one of the national emblems of Ireland. The oldest flag of Ireland even features a golden harp in its design.

However, the government actively discourages using gold instead of orange on the Irish flag. They think this color could get the Protestants to feel not involved. As a result, the orange color has been more encouraged.

People often mistake the Irish flag for the Italian flag

Irish flag vs. Italian flag? People have compared these two national flags since they bear the same look at first glance.

It’s, however, not even the same in one color. While the Irish flag is orange at its right third, the Italian flag is red at the same part.

Ireland has other flags apart from the current Irish flag (Tricolor)

How To Fold Irish Flag?

Knowing how to fold the Irish flag properly can show how much you respect it. Here are the steps:

Step #1: Lay the flag out on a flat surface, with the orange section folded on top of the white stripe.

Step #2: Turn the flag over and fold the green section over the opposite side of the white stripe.

Step 3#: Fold the flag in half lengthwise so that the orange sections are on top of each other while the green stripe remains on the outside of the remaining square.

The Irish Tricolor Has Inspired Us

Over the years of our business, we’ve been truly inspired by the symbolism of the Irish flag. As a result, our flags reflect the Irish tradition that has fulfilled many Irish hearts in America.

We offer a collection that you can use to decorate your home, garden, and other places.

If you want to make a statement about your love for Ireland and its culture, these flags are a perfect choice. Our flags feature shamrocks, Celtic knots, harps, and other symbols that represent Ireland.

We also offer the Irish American flag design — a combination of Irish color and the Old Glory. If you live in America but have the Irish root, this design could fit you best!

You can choose from two types of flags: the Garden flag and the House flag. Both types are constructed of the same material, which is heavy-duty canvas fabric.

The flags feature vibrant colors that will look great hanging on your wall or waving outside your home while you’re celebrating St. Patrick’s Day. These flags also make wonderful gifts for friends and family members who love Ireland!

The Irish flag colors mean many things to the people of Ireland. Over a century, they have portrayed a picture of important periods in Ireland’s history. With the Tricolor, Irish folks hope for a better scene in their country where there would be unity and harmony among different beliefs.

If you have a passion and love for Ireland, show them by displaying your decorative Irish flag today.

Your support means a lot to Flagwix! Thank you.