Firefighter Flags & What Does The Thin Red Line Flag Mean?

Firefighters are those who dare to fight against death in flames to protect other people’s lives, and that’s why we are talking about the firefighter flag in this post. Without a doubt, it’s one of the most honorable things to show our admiration and support to the firemen. 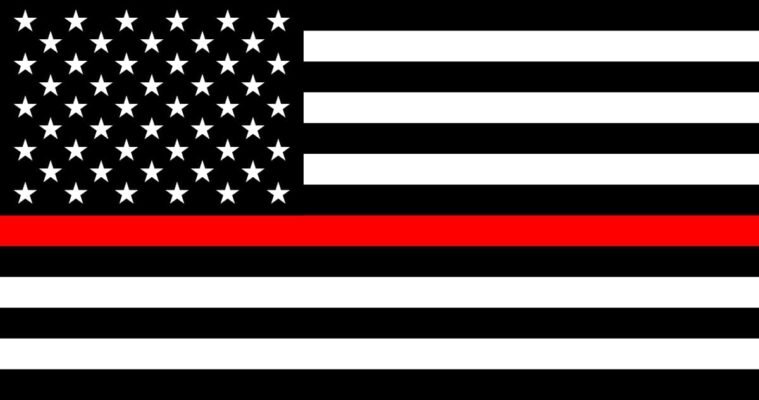 What Is The Firefighter Flag?

The firefighter flag looks like a standard US flag, with one exception: It’s in black and white with one thin red line featured in the center of the flag. Throughout history, the flags appeared in many memorial events and other celebrations to honor those brave firemen. But what do they mean? What is the history behind them? Now, let’s dive into answering these two questions about the black and white American flag with a red stripe!

The first use of the term “Thin Red Line” dates back to the 19th century when a reporter for Britain’s “The Times” newspaper, William H. Russell, wrote about the British firing line during the Battle of Balaclava in the Crimean War. He described how a thin red streak tipped with a line of steel formed as Russian forces advanced on an English position.

In 1999, the term came to recognition in America and has been used by U.S. firefighters since then. However, the thin red line represents much more than just one individual or war story to them. It is a symbolic reminder that we are duty-bound to protect our communities from harm and stay behind our comrades even at great personal risk.

To remind us again, this particular design is known as both the Firefighter’s flag and the Thin Red Line. There is some debate among historians about why firefighters choose to use red in their flags, but there are three dominant theories:

#2. It represents firefighters working together to create a wall of protection from danger;

#3. The red shade stands for fire, which is the root of all reasons why the soldiers are there to protect people.

The Fire Department flag represents the American firemen in a more specific way by featuring an image of the Maltese Cross. For those not familiar with the Maltese Cross—it’s the official symbol of the Fire Service, which is pretty well-known around the world. We will go deeper into this important symbol in the last section of this post.

Nonetheless, this type of fireman flag has no original version. Instead, it comes from many different designs based on the creativity of each individual or organization that builds it. Flagwix offers various Fire Dept flags, which are very unique and sure to turn heads in a block or a crowded event.

Likewise, there is no original Firefighter Memorial flag out there. Oftentimes, people use the black US flag with a red stripe to commemorate the fallen firefighters in some memorial events.

The firefighter memorial flags on Flagwix were designed to remember, honor, and tribute fallen firefighters. One of them features a fireman carrying an injured civilian away from danger, with both individuals looking over their shoulders at an approaching fire. Meanwhile, the other graphics are accompanied by two emblems representing fallen firefighters: a cross and a Maltese cross.

These memorial flags are common in fire stations across America, but they’re not limited to stations—some families have our flags as well to pay tribute to their loved ones. However, there’s one rule you should follow if you decide to get one for your home: Make sure it is hung correctly and that it faces east toward where the sun rises. This symbolizes hope for a new day after tragedy strikes your life.

The Black and White American Flag With Red and Blue Stripe

We’ve got the answer for those wondering what flag represents police and firefighters.

The black-and-white American flag with a red and blue stripe is a flag that people might overlook at first, but it’s an important symbol. It represents both police officers and firefighters, as well as emergency services in general.

The idea is to have one flag represent more than one group: unity and togetherness are potent sentiments that Americans hold dear. The stripes on the flag represent fire (red) and EMS (blue). When placed together, these two stripes create what is known as the thin red line—which depicts a sense of camaraderie between emergency personnel who risk their lives for each other.

We’re giving a brief understanding of the Firefighter symbol to those who might not know about it yet.

The Maltese Cross is a symbol of firefighters’ sacrifice and protection for all people worldwide. It is not limited to a single country but all over the world. This symbol appears on fire stations, fire trucks, firefighters’ uniforms, and even on the bodies of some firefighters as a signature firefighter tattoo design.

When a firefighter wears the Maltese Cross, it means that they prioritize the lives of others over their own.

So, where did this symbol come from?

It began with a story hundreds of years ago. When St. John’s brave crusaders fought the Saracens to regain the holy land, they were overpowered by a weapon unusual for the time. The liquids in the enemy’s weapons mixed into their bodies. Then with a single Saracens torch, all the knights on the front line were engulfed in flames. And many other knights risked their lives in the burning chaos to rescue their fellow soldiers.

The bravery and sacrifice of the soldiers were recognized. They were then awarded badges in the shape of a cross, which symbolized glory and protection. And as these knights had a long history of living on an island called Malta, people have later given a name for the badge: The Maltese Cross.

No matter what represents firefighters, their work is always treasured and honorable since it saves lives. The words on their badges, patches, and tattoos say it all: Courage, Honor, Duty, Respect, and Pride. Be proud too, as you support your local firefighters by displaying their emblematic thin red line flag in your home or business window today! For any support, please send us an email to support@flagwix.com!

> Who Were The Firefighters Who Raised The Flag On 9/11?

> Incredible Firefighter Gifts to Make Your Loved Ones’ Day!