What is The American Police Flag?

What is the American Police Flag? What does it mean? Why do police officers use a thin blue line flag? These are all common questions about flags in general and police flags in particular.

This post will answer those questions, plus many more, so that you know everything there is to know about how to fly the American police flags and other meanings behind this powerful symbol of unity and support for our nation’s law enforcement officials. 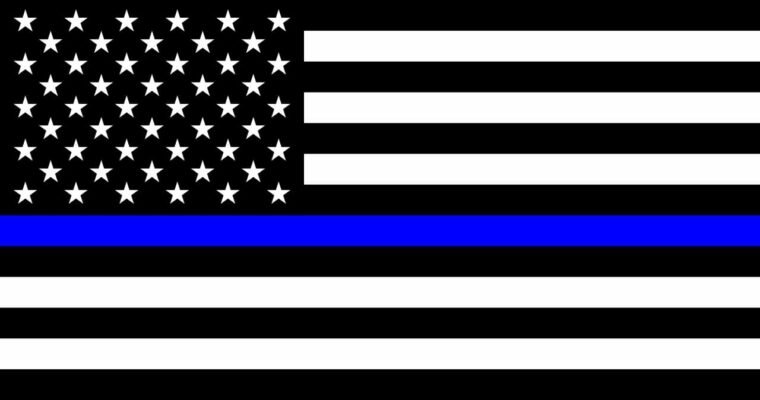 The United States police flag is a black and white version of the American flag, with a blue horizontal stripe across the center of the flag (beneath the square of 50 white stars). Other symbols, such as stars or logos, can also be included.

Our police flag collection includes many unique designs that will add a special meaning to your flag display, ranging from variations on Holidays and National Services to something adorable like a K9 dog. Alternatively, if you want your flag personalized with names and texts on it, we have what you need!

The Thin Blue Line refers to a phenomenon in which police officers stand between criminals and their victims as a literal representation of law enforcement’s duty to protect its citizens.

The phrase ‘the thin blue line’ was first used in 1877 by Sir Robert Peel, founder of London’s Metropolitan Police Force. He used it to describe how two officers stood guard between an angry mob and several people being held for execution. The thin blue line concept went on to describe how two guardsmen maintained order during a rugby match in Glasgow, Scotland (in 1902) and eventually became commonly associated with police presence at sporting events—whether protecting players from fans or crowd control.

The flag then came to prominence in America in 1994 and works as a symbol of support for police. Nowadays, many departments fly flags bearing a thin blue line when officers are killed in action or missing. This thin blue line flag is sometimes confused with Old Glory (the Stars and Stripes), but it’s important to know that they’re two separate things.

In short, the thin blue line flag meaning refers to police officers standing in solidarity against all that seek to threaten or harm society. And the thin blue line separates order from chaos, protects those who cannot protect themselves, and shows the police care.

Watch this video to learn the meanings of Thin Blue Line explained by a U.S. police officer:

How It is Used

The flag is typically used as a police mourning flag during special events and holidays, like in the case of funerals and memorials for fallen officers.

The thin blue line represents law enforcement, and the gold stripes represent other emergency services (firefighters, paramedics). Police departments will often use them to show support for events or causes related to law enforcement. This way can include backing up a new bill that’s being passed in Congress or supporting efforts to get military flags out at sporting events after veterans have been involved in an altercation with home fans.

You can also use a thin blue line flag in smaller events (yet, with significant meaning), like displaying it in your house or office as a reminder of our many brave men and women who have sacrificed so much in service to our country.

In all cases, the purpose is to recognize law enforcement and pay tribute to those who have died while serving their communities as police officers.

As with any flag flown in honor of a fallen hero, you’ll want to always show respect for it and its purpose. While doing that, there are a few thin blue line flag etiquette guidelines you should follow.

Aside from that, there is a flag with three stripes and three colors, blue, red, and green, to honor the heroes in all three fields. They are all people deserving of our respect and honor.

Flagwix offers this type of flag with well-designed graphics. Whether you’re looking for a military police flag, police K9 flag, or customized police department flag with badges, we’ve got you covered.

Is There a Law Enforcement Flag?

While there’s no official law enforcement flag per se, most police departments and other branches of law enforcement do have a flag. The thin blue line has come to represent those in service to keep our country safe—and it’s everywhere you look.

Yes and No. Technically, first, a flag with a blue line on it isn’t really an official police flag. According to laws set by Congress in 2002, police flags must be rectangular and have specific proportions based on size. So in that respect, no, Thin Blue Line flags aren’t strictly legal ─ but they also aren’t technically illegal either. That being said, if you choose to purchase one of these flags because you want to show your support for law enforcement officers or in memory of fallen officers, nothing is stopping you from doing so.

Where Can I Buy a Police Flag?

There are online stores that sell police flags, but you can also buy them from your local hardware stores. You’ll be able to find such a flag no matter where you live. But if you want to have a unique and customized thin blue line flag, Flagwix is your best choice (with many options for you). If there is any information about the flags that we can provide, send us an email at support@flagwix.com.

Although there’s no official connection between the thin blue line flags and law enforcement agencies, many Americans have come to use them as representations of patriotism, bravery, and community service by law enforcement officials. It’s such a beautiful thing to witness people show their pride and support to our nation’s heroes through these police flags no matter what.